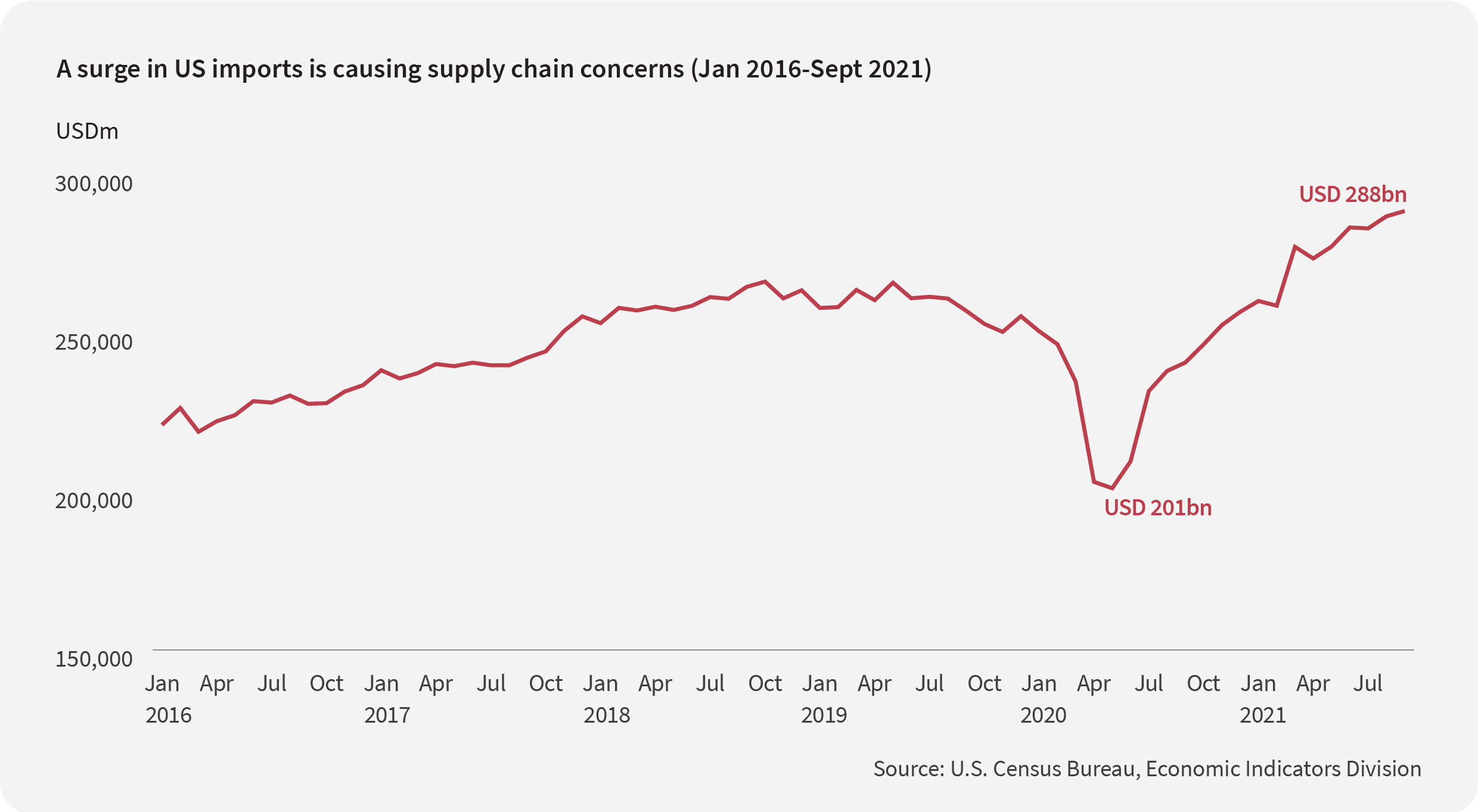 Unless you're fortunate enough to be doing business in a service-based industry, chances are you've felt the pinch of ongoing supply chains snarls.

Resurgent demand has been wreaking havoc on companies since the summer as COVID-19 restrictions began to ease up. US imports rebounded in September to US$288.5 billion, up 19.9% year-on-year and 43.5% on the nadir of May 2020—and companies across the board have been trying to keep up.

What can they expect from supply chains in the months ahead? Is there any light at the end of the supply chain tunnel?

1/ In the short term, there will likely be a more reliable port in the storm

The surge in demand has led to bottlenecks and congestion at popular coastal ports, especially Long Beach and Los Angeles. But it's not only this rebound in demand that is causing issues. Quarantining crews and disruptions at customs have been compounded by a shortage of truck drivers to move freight out of terminals.

Factory shutdowns in export markets like Vietnam have also contributed to the current situation.

The Biden administration has sought short-term fixes. In October, it was announced that the Port of Los Angeles would start operating 24/7. Similar measures were taken a month prior when the Port of Long Beach revised its schedule. Congestion at the ports remains an issue, but hopefully this traffic will subside as systems are put in place to balance these supply and demand issues.

2/ In the long term, innovative solutions will be needed to break the bottlenecks

In October 2021, the American Trucking Associations estimated that the industry is facing a shortfall of 80,000 drivers—already a record and one that could well double by 2030 as more retire and others fail to take to the wheel.

This is by no means exclusive to the US. Since the UK's departure from the EU, it has contended with gas and other shortages as foreign truck drivers that went home during the pandemic never returned. Germany has been facing the same dearth of drivers, as the global interconnectedness of economies has created a traffic jam everywhere.

Self-driving vehicles may offer the solution. Earlier this year, Amazon ordered 1,000 autonomous truck-driving systems from a startup called Plus and the e-commerce giant also has the option to buy shares in the Silicon Valley AI company.

Not long ago, autonomous trucking seemed like a long way off. With the current breakdown in supply chain networks, there has never been more pressure to make this a reality.