Chip off the new blockchain— crypto M&A enters the mainstream

Chip off the new blockchain— crypto M&A enters the mainstream 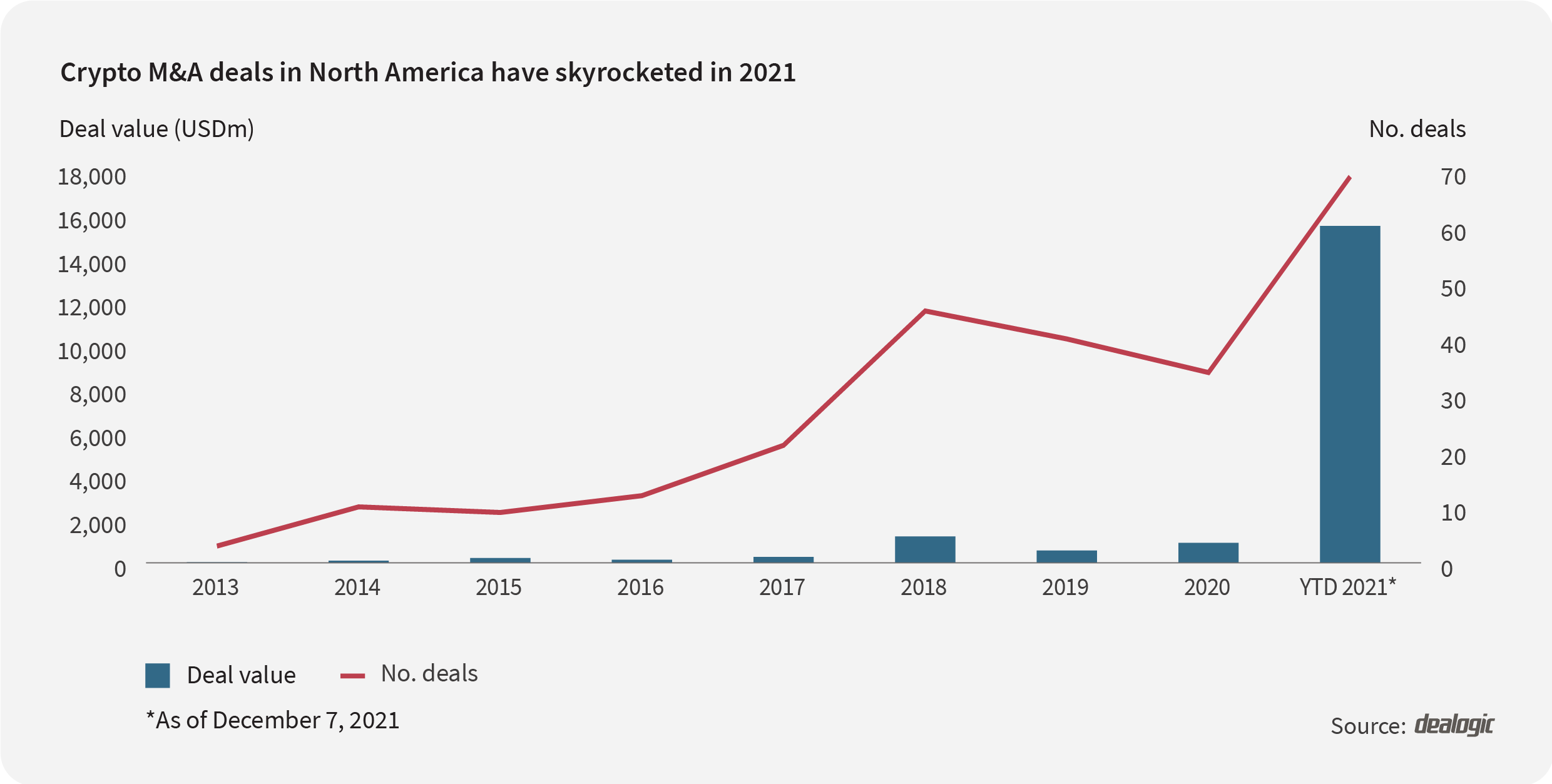 It was only a matter of time before the explosive appetite for cryptocurrencies reared its head in the M&A scene.

Globally, we’ve seen 158 crypto deals this year (as of December 7) worth a total of US$23.8 billion—almost 10x the next highest year on record, which was in 2018. APAC has seen its fair share of such transactions (55 deals worth US$5.8 billion) and EMEA hasn’t been left entirely behind (26 deals worth US$2 billion).

But North America has been the heartland for crypto M&A. Deals in the region mushroomed to US$15.5 billion in 2021 across 69 deals, year-to-date—a massive jump from the previous record of US$1.2 billion set in 2018. More than 80% of the past decade’s transactions in the US space have happened this year.

The public market debut of Bakkt in October is one notable example—if only for its size. The US$19.5 billion merger arrived by way of that other financial markets trend: the SPAC. It also signified the return of the crypto asset class since Coinbase's direct listing in April, after which the market caught a bad case of FUD (fear, uncertainty and doubt in cryptospeak) and spent a couple of months in the doldrums

Bakkt is not the only company whose route to market came via a blank check company. Digital wealth management company Apex Clearing merged with a SPAC in a US$4.8 billion deal, as did blockchain infrastructure provider Core Scientific (for US$4 billion), while Bitcoin miner Cipher Mining’s US$2.1 billion merger can also be added to that growing list. But crypto M&A has not exclusively been reserved for SPAC sponsors.

As former Goldman Sachs macro trader Raoul Pal likes to point out, cryptos are proving themselves to be the most rapidly growing tech in history, outpacing the internet's adoption through the 2000s.

For this reason, players in the global payments system ecosystem are racing towards integration. Mastercard, for example, in October announced a tie-up with Bakkt to help banks offer crypto credit card rewards. Paypal has integrated crypto payments as has Visa—the latter is even playing trader, having bought itself one of 10,000 Crypto Punks, one of the first and most coveted NFT collections.

And let's not forget that El Salvador officially adopted Bitcoin as legal tender in September, a move that will surely see other countries follow in its footsteps.

With inflation on the rise, and the dollar and other fiat currencies losing purchasing power by the day, making the case for deflationary assets like Bitcoin look increasingly attractive.

It's not all upside, of course. The US Securities and Exchange Commission has expressed concerns about all manner of activities in the crypto wild west.

Bitcoin may be viewed as a commodity, a digital gold if you like, and therefore will largely sidestep regulatory oversight. But the same cannot be said for the thousands of other projects running on various blockchains.

Major points of contention include whether decentralized finance is considered lending, whether all coins sold are utility tokens or securities, and if decentralized exchanges are operating as unlicensed securities exchanges.

Regulation is all but guaranteed, but many see this as bullish in the long term. Once the rules of engagement have been established, various digital assets and companies providing services to the ecosystem will be able to flourish, and M&A will follow. In crypto, the genie is already well out of the bottle.