“Green hydrogen” is being touted as a solution to Europe's net-zero ambitions, but the infrastructure is still in its infancy and there are few assets available to trade. Projects are being planned, however, and funding for capacity expansion has been earmarked, setting the stage for an uptick in M&A activity for energy and utilities companies.

To generate green hydrogen you need water, a large electrolyser and abundant supplies of renewable electricity. The EU sees huge potential in this area—there are plans to build 40GW of green hydrogen electrolysers producing up to 10 million tonnes of renewable hydrogen each year by 2030. Off the shore of Aberdeen, Scotland, ERM’s pioneering floating Dolphyn project expects to achieve this by 2024 using wind alone.

According to Infralogic, almost 80 hydrogen-infrastructure projects are currently in the pipeline.

This activity is extremely bullish for financial investors and strategics, the line between which blurred with the October launch of a new fund to invest in the space. TotalEnergies teamed up with Air Liquide and Vinci for a €1.5 billion fund to invest in hydrogen-related assets, with €800 million in commitments already secured and the fund open to further investment from accredited institutional investors.

At the moment, the M&A deals being done are small, involving young companies rather than large-scale M&A targets. But there has been steady growth in the number of European venture capital deals linked to hydrogen in recent years, according to Dealogic, from four in 2019 up to 10 already in 2021 (matching 2020’s full year total). This year has also seen €380.4 million in deals, rocketing up from €36 million in 2019. 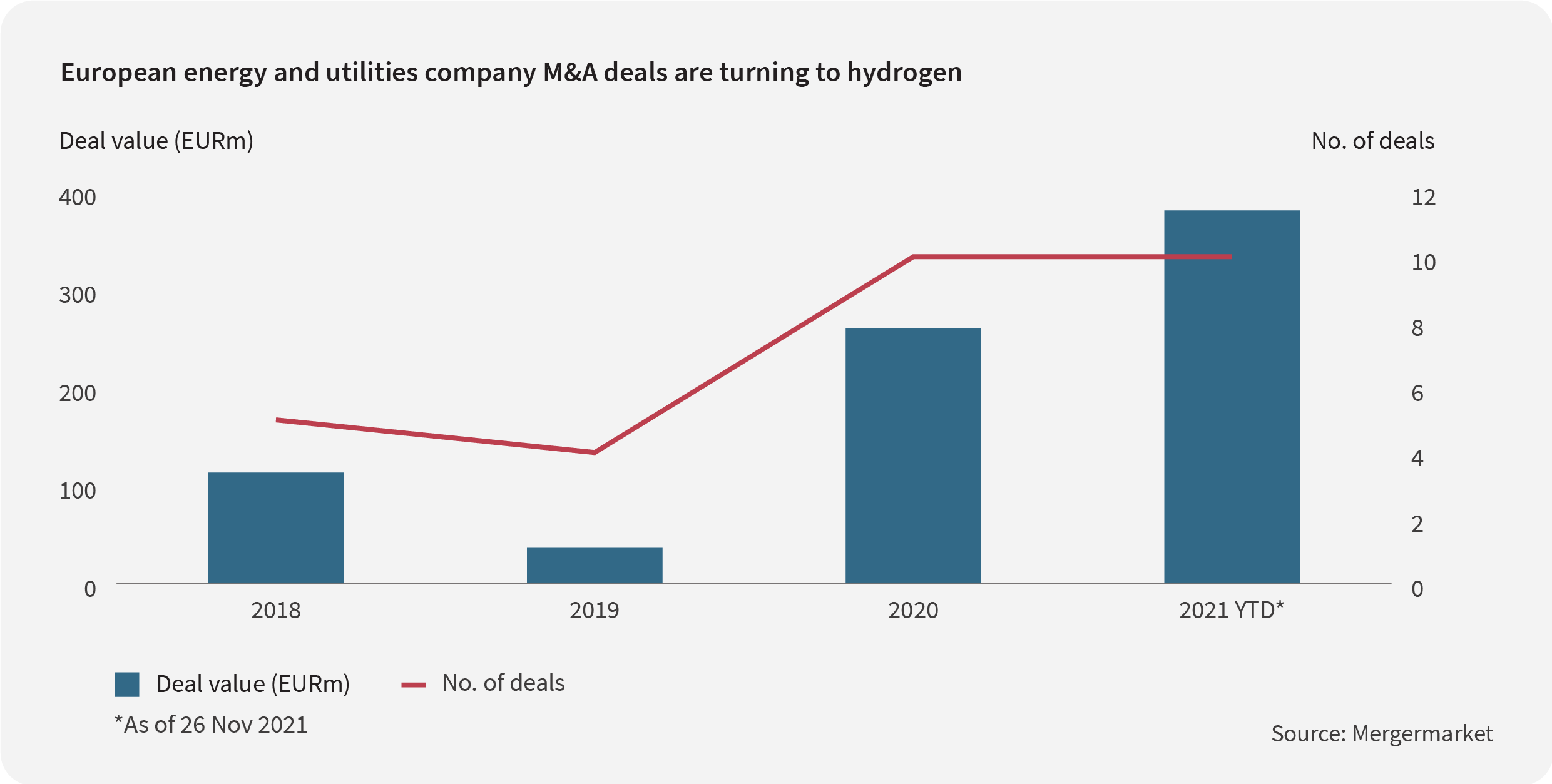 However, there is a more generic play in motion. Investors’ optimistic view of hydrogen’s place in the future energy mix is drawing them to gas infrastructure deals. In Germany, strategics Snam and Fluxys bid against Macquarie and local pension fund VKB for gas-transmission business Thyssengas, eventually losing out to the Australian investor.

Two similar large cap deals in the making are being motivated by confidence around replacing natural gas with its greener cousin. Macquarie is prepping the sale of Open Grid Europe (OGE), Germany’s largest gas transmission system operator, in a deal that could fetch €6 billion. OGE, which was originally part of German utility E.ON before it was sold in 2012, operates a network of about 7,500 miles of gas pipeline and has hydrogen firmly in its strategic plans.

A stake in National Grid’s UK-wide gas transmission business is also up for grabs after the grid operator acquired the country's largest electricity distribution business for £7.8 billion in March, as it embarks on an electric future. The sale has been lined up for months, during which time the UK government drew up its first ever hydrogen strategy. The plan, published in August 2021, is to unlock £4 billion of investment in hydrogen generation, storage and use this decade.

As governments across Europe set out their stall and the path forward becomes clearer, hydrogen will be a common denominator in gaseous M&A.