In the world of private equity (PE), the denominator effect raises its head from time to time. The phenomenon occurs when public markets take a bruising, as they have done in H1 2022, resulting in an overexposure to asset classes that have not been marked down to the same extent or for which there’s a lag in revaluing.

In short, investors become overexposed to things like PE, and therefore become more reluctant to commit to new fundraisings. They instead prioritise addressing allocation imbalances in their portfolios.

Case in point: in the US, the Oregon Public Employee Retirement Fund’s PE allocation ballooned to more than 27% in Q1 due to write-downs on its liquid assets.

As a result, PE investors—limited partners (LPs)—are swamped with fundraising request but hardly jumping at every opportunity. Sponsors seem likely to raise less in 2022 than in 2021, which was a strong performer. In Europe this year, they’ve collectively raised €77.5 billion across 41 funds, compared with €196 billion across 106 funds in all of 2021. 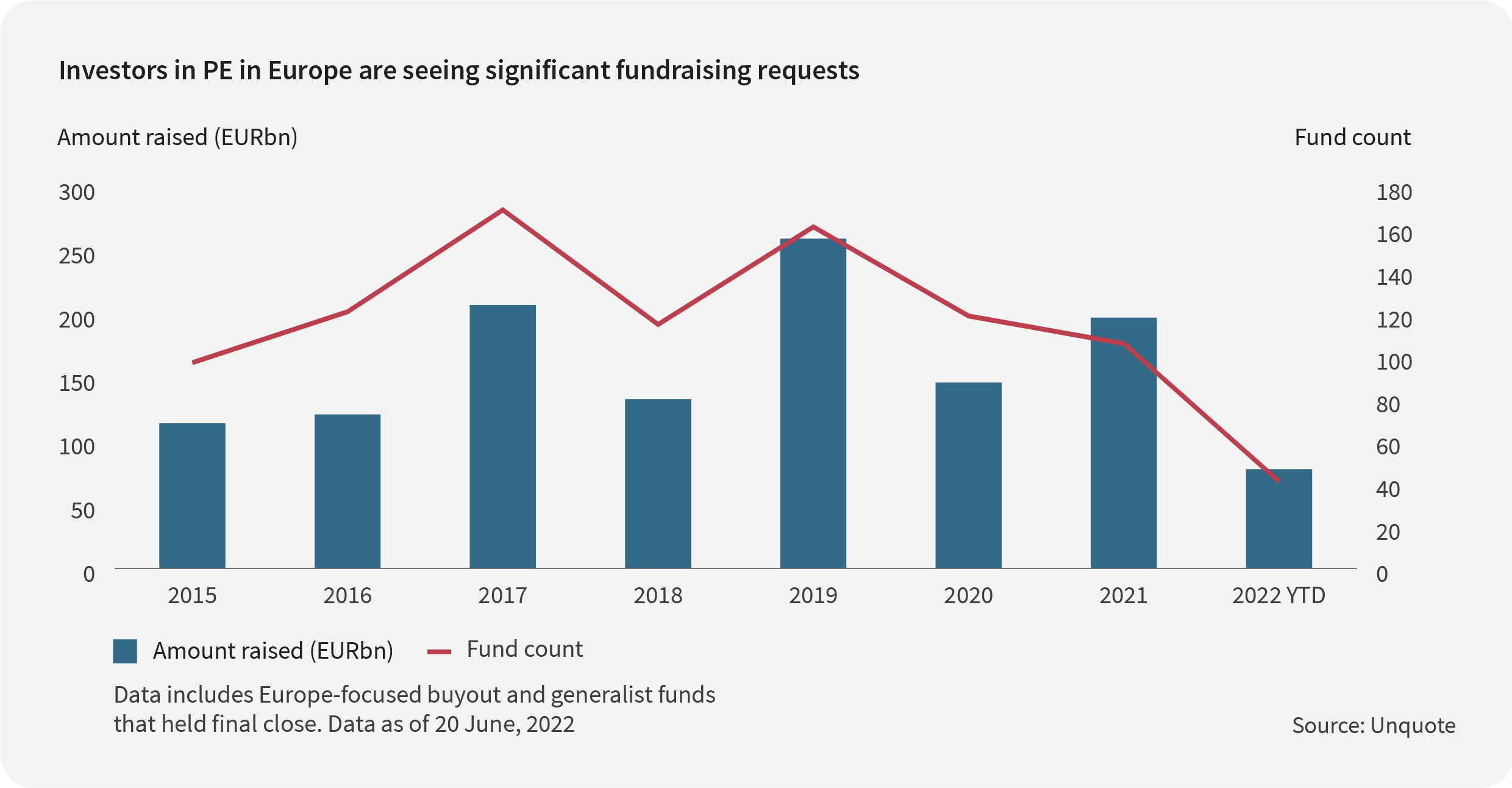 But some names are raising without a hitch. Advent International struck gold with one of the biggest ever funds to invest in Europe, at US$25 billion. The fund, called GPE X, is the second largest ever raised in the PE industry after Blackstone’s US$26 billion vehicle closed in 2019. It is also significantly larger than its own US$17.5 billion predecessor fund.

GPE X will buy 35 to 40 companies in the next few years with tickets ranging from US$100 million to US$2 billion across five core sectors—business and financial services, healthcare, industrial, retail, consumer and leisure, and technology. It is estimated that Advent has US$11 billion in dry powder on hand in Europe alone, with some 40%-45% of its new fund earmarked for the region.

The firm finds itself in an enviable position. With one of the worst starts to the year for stock markets, as investors panicked about inflation and tightening monetary conditions, assets are going cheap.

The market is expecting a lot more public-to-private deals in non-consumer-driven, inflation-resistant sectors like healthcare and energy. In addition to these take-privates, corporates are likely to seek opportunities to raise cash amid slowing growth, by disposing of non-critical business units that PE funds can polish up and sell on.

PE firms with fresh capital to deploy in this environment are positioned to provide investors big returns in the next 12-24 months, and Advent has that capital in spades. It also managed to collect its latest haul in a relatively short period of time, with reports of the fund’s launch surfacing as recently as October.

Not every PE manager will be so fortunate with their timing or have the track record necessary to raise so much so quickly. For many, the denominator effect may have some time to play out before LP appetite for PE funds fully returns.