Don't call it a comeback—SPACs are back on track

Don't call it a comeback—SPACs are back on track

Issuance of SPACs may have nosedived since the hectic first months of 2021, but they never left—and in October, cash shell IPOs made their presence felt once again. 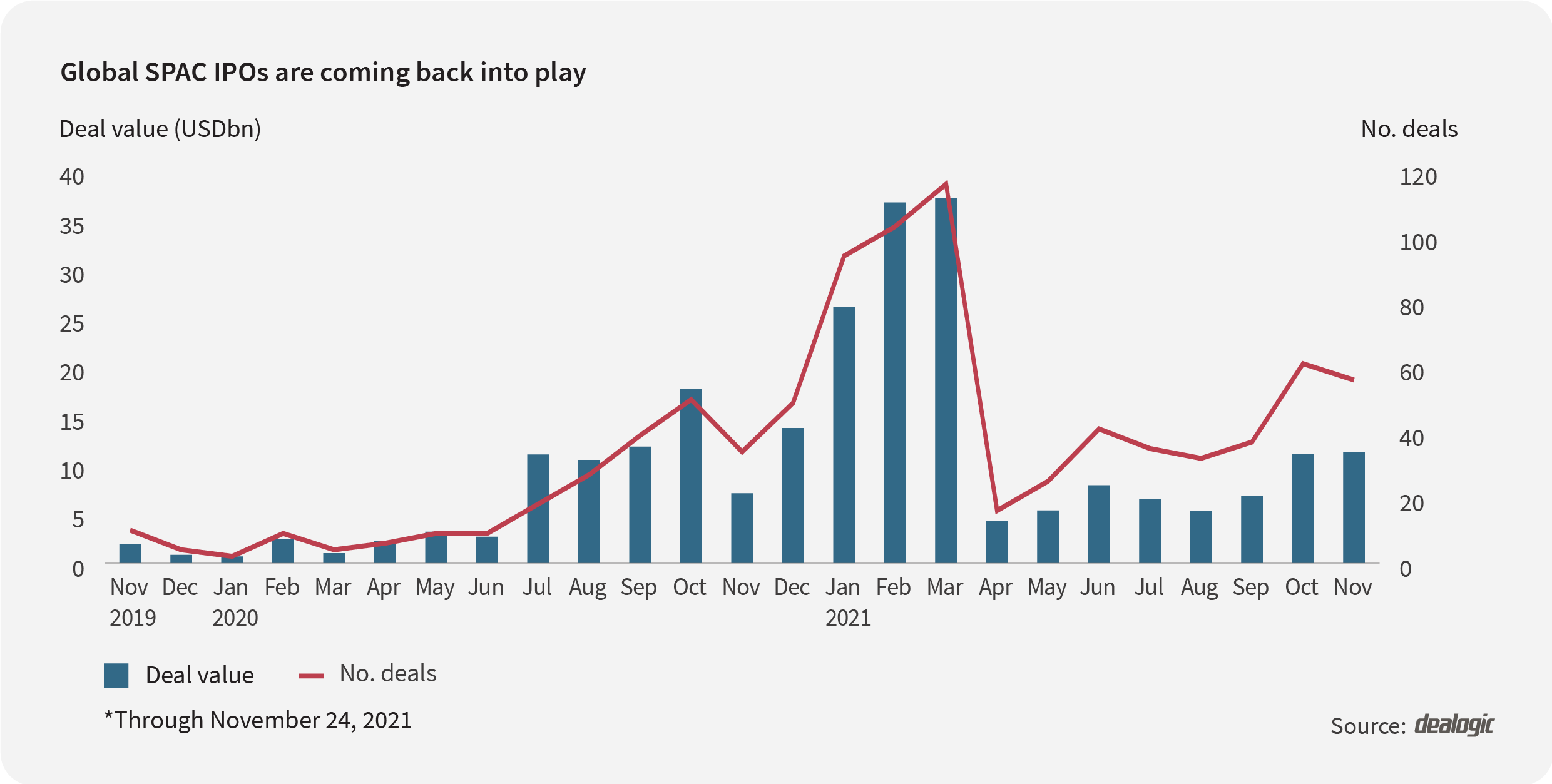 While the Nasdaq and the New York Stock Exchange remain the go-to venues for these fast-track listing vehicles, other markets are gradually accepting them as well, despite the frenetic boom and (almost) bust in the US earlier this year. Europe has seen increased activity in the past several months and exchanges in Hong Kong and Singapore are outlining frameworks to welcome SPACs.

November is also showing promise. There were 54 new SPAC issuances on US stock exchanges totaling US$11 billion so far this month, according to Dealogic.

A year to remember

This year has been one for the history books. Half of all IPOs on the Nasdaq and NYSE in 2021 have been issued by SPACs. As of November 25, 559 cash shells have listed on US exchanges this year, raising nearly US$150.5 billion.

With so much money chasing a finite supply of deals, a major concern is that the market has become oversaturated. Competition among blank check companies to find mergers was already stiff prior to the recent rebound in issuance. It will only get stiffer as more cash shells list.

Part of the problem is the lag between raising and merging. Once listed on an exchange, SPACs typically have up to 24 months to find a deal target. This means a backlog of empty shells is piling up. Dealogic data shows there are currently 546 US-listed cash shells seeking acquisition targets.

The nascent increase in SPAC IPOs in recent weeks is adding to the supply of these vehicles in deal-seeking mode, causing investors to re-evaluate their exposure. Private investment in public equity (PIPE) placements, which both validate de-SPAC mergers and provide the necessary capital to complete these deals, are shrinking.

The average amount of capital raised in PIPEs was 59.7% of the amount raised in SPAC IPOs in October, per Dealogic, down from 77.8% in September and 91.5% in August. So far in November, the average PIPE-to-SPAC IPO ratio sits at 45.5%.

With institutional money stepping back and investors exercising their redemption rights en masse, SPAC sponsors may have to pare back their ambitions in 2022 with smaller deals or devise creative fixes to cover capital shortfalls. Just don't bank on SPACs disappearing—they may be down, but they are far from out.