European corporate credit is going through an up-rising

European corporate credit is going through an up-rising

Recent months have been kind to Western European corporates—or at least kinder. The improved operating environment and economic recovery have lifted companies up the credit rating ladder, enabling them to borrow on more attractive terms. What can corporates hoping for an upgrade learn from this development? 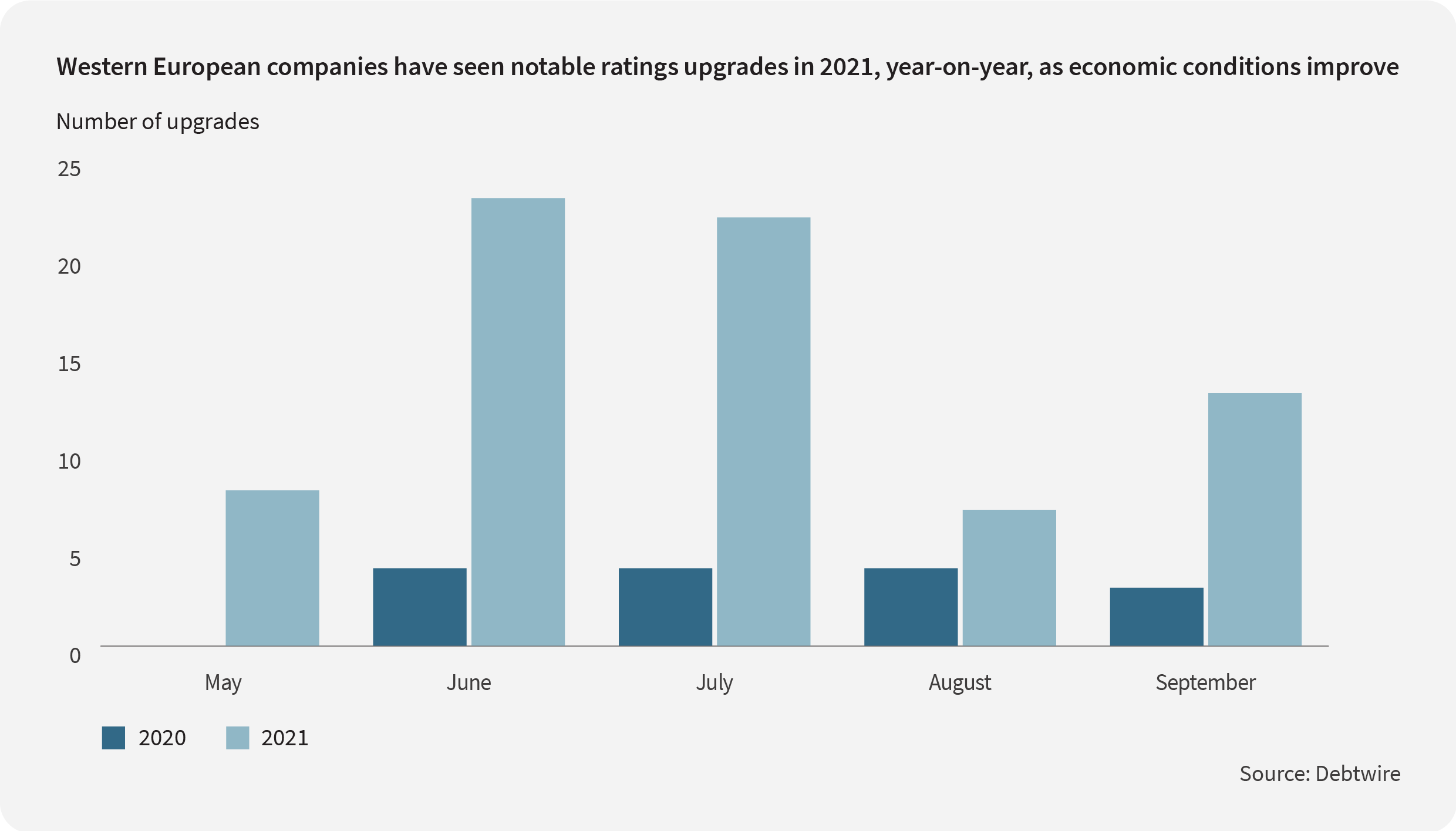 1/ The UK has seen a big improvement, but companies across Europe are seeing their fortunes change

Between May and September, 73 issuers in the region saw their ratings awarded by Moody's, S&P and Fitch collectively improve by one notch. Over the same period last year, only 15 companies could say the same.

Geographically, it's the UK that stands out even as companies contend with Brexit headwinds. The country saw 17 issuers benefit from a rating upgrade over the period. Germany, Switzerland and Italy were some way behind with eight upgrades each.

Sector wise, industrials has shown the biggest improvement, with 11 issuers rising, followed by transportation (9), energy (8) and services — other (8).

These are positive signs for any company hoping for a better future rating.

2/ Credit rating agencies are much ado about everything

It goes without saying that now is the time to borrow. Rates remain at rock bottom and the European Central Bank said last week that it is unlikely this will change through 2022. At the same time, trading conditions are improving.

However, ratings agencies are widening the net of factors that influence their scoring, so corporates need to be mindful. Between May and December last year, S&P recorded environmental, social and governance (ESG) factors influencing nearly 2,300 rating actions globally, of which more than 900 were downgrades.

ESG is intimately connected to shareholder activism, too. Companies that are seen to be dragging their feet on sustainability tend to see more backlash from their investors. S&P has noted that shareholder campaigns reached an all-time high in 2020 and that this rising activism mostly harms credit quality.

If that weren't enough, cybercrime is another factor that issuers need to consider. Cyberattacks can harm credit ratings, mainly through reputational damage and potential monetary losses.

Banks and other financial institutions are especially prone, give their reservoirs of personal data and the critical role they play in servicing financial activity. To date, cyberattacks have had limited impact on credit rating actions but S&P has said that may change.

When it comes time to lean on debt markets, corporates have much more to think about than just their balance sheets and P&L accounts.