The video game sector is one of the lucky few that has flourished during the pandemic. Couch-bound consumers in need of a distraction have played to their heart's content.

Newzoo estimates the global games market will top US$180.3 billion in revenue in 2021, with mobile games capturing around half of that, console gaming taking around 28% and PC games accounting for 20%.

Quite simply, gaming is the fastest growing entertainment segment in the marketplace.

And with so much consumer spend up for grabs, M&A in the sector is booming, especially in North America. Software gaming deals in the region have hit new heights in each of the past three years—in 2020, deals worth US$27.4 billion were announced, beating the previous record of US$17 billion set in 2019. While deal value has dipped to US$14.4 billion in 2021 (as of November 9th), the 57 deals already completed have matched last year’s record haul—and there is little sign of activity letting up. 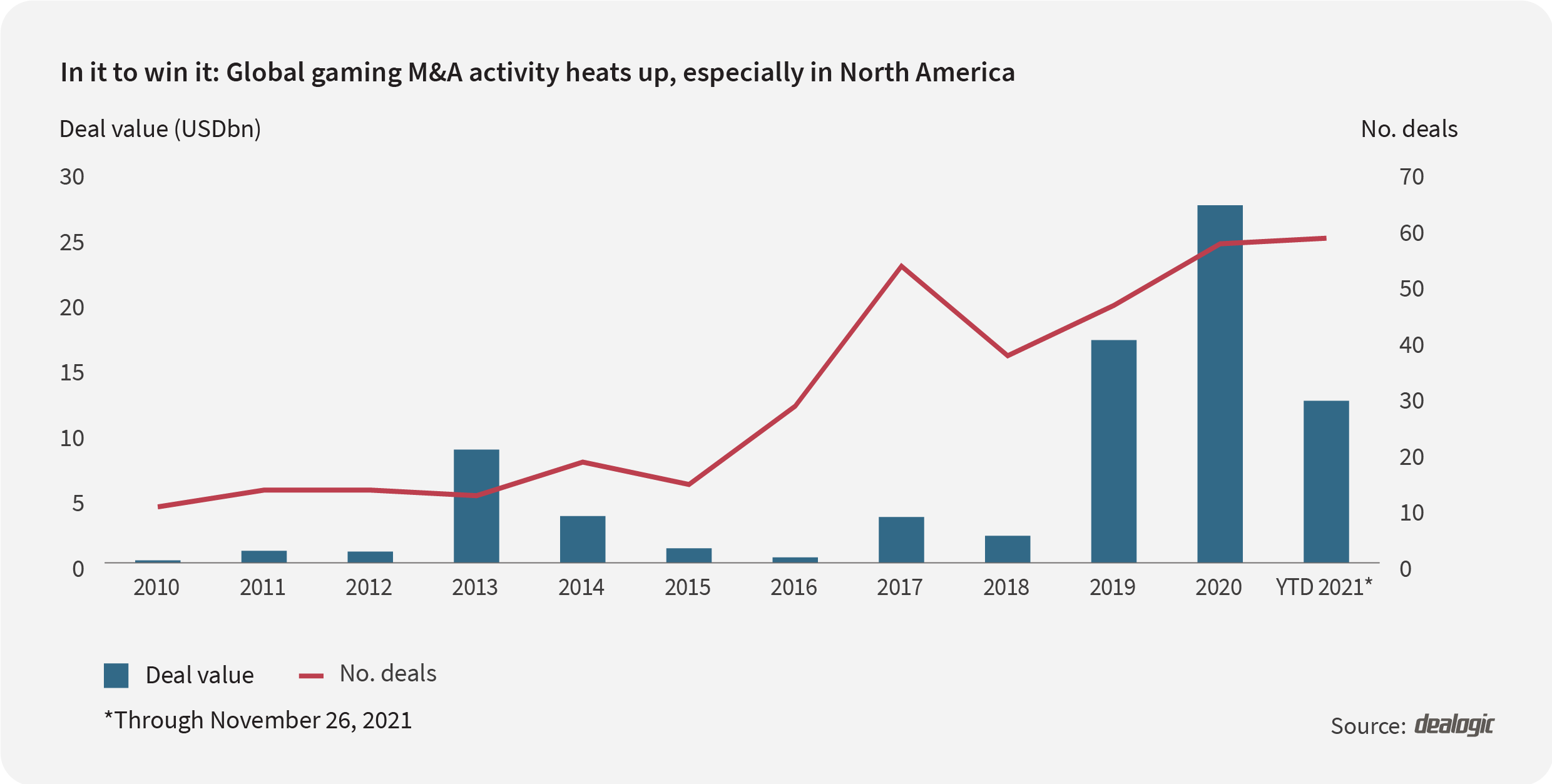 Just last week, Enthusiast Gaming Holdings, the Toronto-based media and content platform for video game and e-sports fans, announced that it has acquired Outplayed, the Austin, Texas-based owner of U.GG, which is one of the largest League of Legends fan communities in the world—180 million people reportedly played League of Legends in October 2021, an all-time high. The deal was worth around US$45 million in cash and stock and up to US$12 million in potential earn-outs.

Activity outside of North America looks equally enthusiastic. Earlier in the month, for example, it was reported that Tencent Holdings—the largest video game vendor in the world—has acquired a 90% stake in Hong Kong-based Wake Up Interactive, which develops video game software in Japan, for more than US$44 million. Wake Up Interactive owns Soleil, based in Tokyo, which develops games for the Nintendo Switch game console.

The release of next generation consoles has also given the market a push. In November 2020, Microsoft dropped its latest Xbox and Sony its newest PlayStation, its first refresh in seven years. While there has been no shortage of demand, distribution has been disrupted by the ongoing semiconductor shortage—getting your hands on a PS5 these days is like winning the lottery, adding yet more buzz to the industry.

Outside of these flagship platform launches, however, what is most remarkable about the sector is its ongoing transformation. The gaming companies of today and tomorrow look decidedly unfamiliar.

For years, Netflix CEO Reed Hastings stated that video games like Fortnite pose a greater threat to the video streaming service than direct rivals such as HBO Max, Disney+, Hulu or Amazon Prime.

This month, it finally launched its own mobile games service, having snared its first video gaming developer, Night School Studio, in late September for undisclosed terms. No doubt more deals will follow as Netflix strives to realize its new strategic vision.

But the streaming giant's pivot is just the tip of the iceberg for a sector that is witnessing no less than a revolution.

New kids on the block

The attraction for gamers is that many releases use play-to-earn (P2E) models, making beloved hobbies a new source of income and potentially a career. Gamers can earn native cryptocurrencies by playing and winning characters and other features that are also tradeable non-fungible tokens, or NFTs.

Earlier this year, Axie Infinity, the largest crypto game by market cap, earned players more per hour than the minimum wage in the Philippines, one of the game's key markets. Despite this success, the value of its native token, SLP, has since slipped, making gameplay less lucrative than it once was.

Zynga, the largest mobile video game company in the US, knows full well the potential of P2E. This month the business hired a new vice president to lead its blockchain efforts. These rapid innovations almost guarantee that, via M&A, the established software developer market five years from now will be virtually unrecognizable.

Welcome to the future of gaming.