Making amends—why are some debt negotiations heating up in Europe?

Making amends—why are some debt negotiations heating up in Europe?

Omicron has soured the prospects for some industries still recovering from the original impact of COVID-19. Even before this latest variant and ensuing round of new government restrictions dimmed the outlook for companies worst affected by the pandemic, there were already signs of ongoing stress.

These signs can be seen in Europe's debt markets, particularly so-called amend-and-extend (A&E) requests. These are pursued by borrowers looking to delay loan and bond maturities rather than refinance or cough up cash holdings to pay off the debt amid challenging conditions.

In these situations, borrowers approach lenders with a plan to extend the maturity on portions of their existing debt, often in exchange for an amendment that increases the payments back to the lenders. 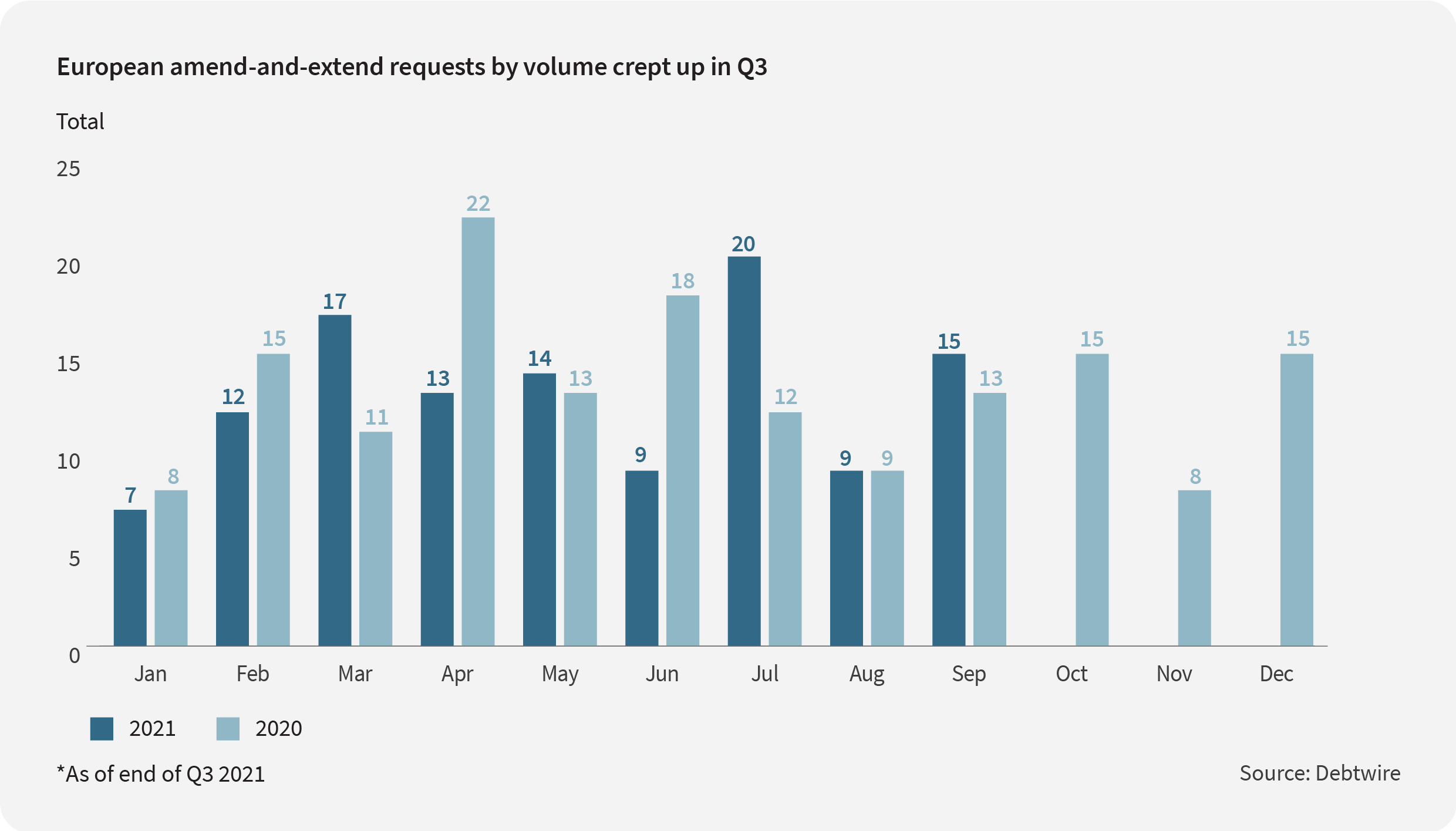 In Q3 of this year, A&E requests increased to 44, up from 36 the previous quarter. This is also up from the 32 requests made in Q3 last year, according to Debtwire. Among these 44 recent situations, 25 were extension requests, nine were repricings and the remaining ten involved changes in covenants or other terms.

What do you need to know if things aren’t going well and you’re considering a trip to A&E?

1/ Companies in some countries are struggling more than others

Geographically, the UK topped the country list in Q3, claiming ten requests, followed by Norway and Spain with seven deals each, and Germany with five deals.

One of the most notable deals in the UK involved the famous carmaker Jaguar Land Rover Automotive, which won its lenders’ consent to upsize the £1.935 billion unsecured revolver facility to £2.01 billion in July. On expiry, the revolver will be replaced with a £1.5 billion unsecured forward start facility, a committed syndicated loan used to refinance an existing loan on maturity.

2/ As far as sectors go, it's the usual suspects

The energy industry tops the table with 14 requests, followed by six deals in the leisure sector and five in industrial products and services.

For instance, DOF Subsea extended the standstill agreement of its secured debt and bond debt to 30 November 2021, the Norwegian subsea operating company later clinching a further extension until 31 January 2022.

In Germany, lenders of TUI, the world's largest tourism business, extended the maturity of its €4.7 billion revolving credit facilities by two years to July 2024 while suspending covenant testing for September 2021 and March 2022.

It's too early to tell whether the recent rise in A&E activity spells a more long-term trend. There were 116 such requests in the first nine months of 2021, compared with 121 in 2020, a relatively small drop on the first year of the pandemic. Time will tell whether the situation is improving or worsening.