Shopping centres in Europe may be running out time, if the lack of M&A activity this year is anything to go by. The sector saw the lowest dealmaking figures in this arena since Dealogic records began more than 20 years ago, with the €1 billion mark yet to be claimed. 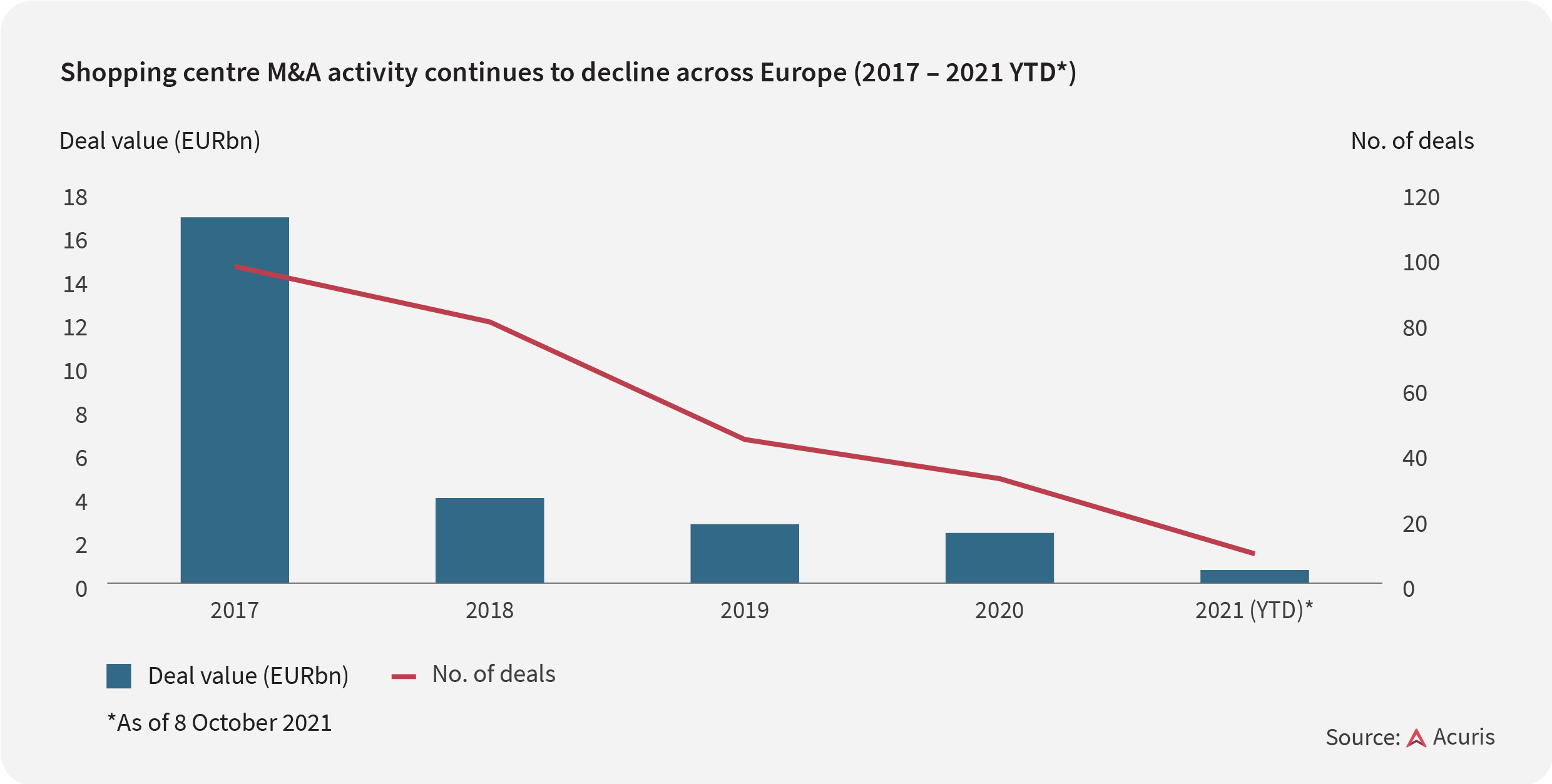 A total of €646 million has been spent across nine deals to date, the largest being Unibail’s sale of a 60% stake in Slovakian mall Aupark Bratislava to Wood & Co and Tatra Asset Management, valuing the asset at €450 million. This year’s only other similarly sized deal is Turkish bank Akbank’s circa €260 million acquisition of the Istanbul-based Palladium AVM mall to cover a debt owed by vendor Tahincioglu Holding.

What does this mean for the future of retail in Europe? And what lessons should corporates in other sectors learn from these developments?

1/ Always keep an eye on the long term

In fact, the deal market was already so weak that the pandemic barely made a dent: 2020 saw just €2.3 billion invested in 32 takeovers. For property owners looking at these numbers, the writing has been on the wall for some time.

2/ When the wind shifts, you need change tack

Faced with the online shopping megatrend and this less than positive outlook for malls, many investors are rethinking their strategy. Some are pivoting into warehousing and logistics, the back end of retail being boosted rather than cannibalised by the Amazon effect as distribution networks have expanded, even during the pandemic.

Case in point: in March 2021, Starwood took over RDI REIT, which had already made the move into logistics.

Blackstone has been highly active in the shopping mall space and continues to forge deals, but only when they still make sense—in January, the PE house became the largest mall operator in India with the acquisition of Prestige Group’s retail portfolio. But in Europe, Blackstone has focused instead on delivery. It established a pan-continental last-mile logistics platform called Mileway and has been snaffling assets. In March, the firm invested €290 million in a portfolio of logistics assets in the UK and France from InfraRed Capital Partners.

Meanwhile, Allcargo Logistics has said it wants to invest in the space in Europe, while in May property firm LondonMetric raised £100 million for UK deals.

For previously agnostic retail investors, Europe's shopping malls are not where the deals are to be found, unless they are in prime city centre locations or have cornered monied luxury buyers. Today, logistics is the retail play.