The pandemic has not been kind to airlines. Lockdowns, border closures and an aversion to all but essential travel have pushed many into restructuring situations. Over two-thirds of the global airline restructurings tracked by Debtwire's Restructuring Database since the beginning of 2016 have occurred since the onset of COVID-19. 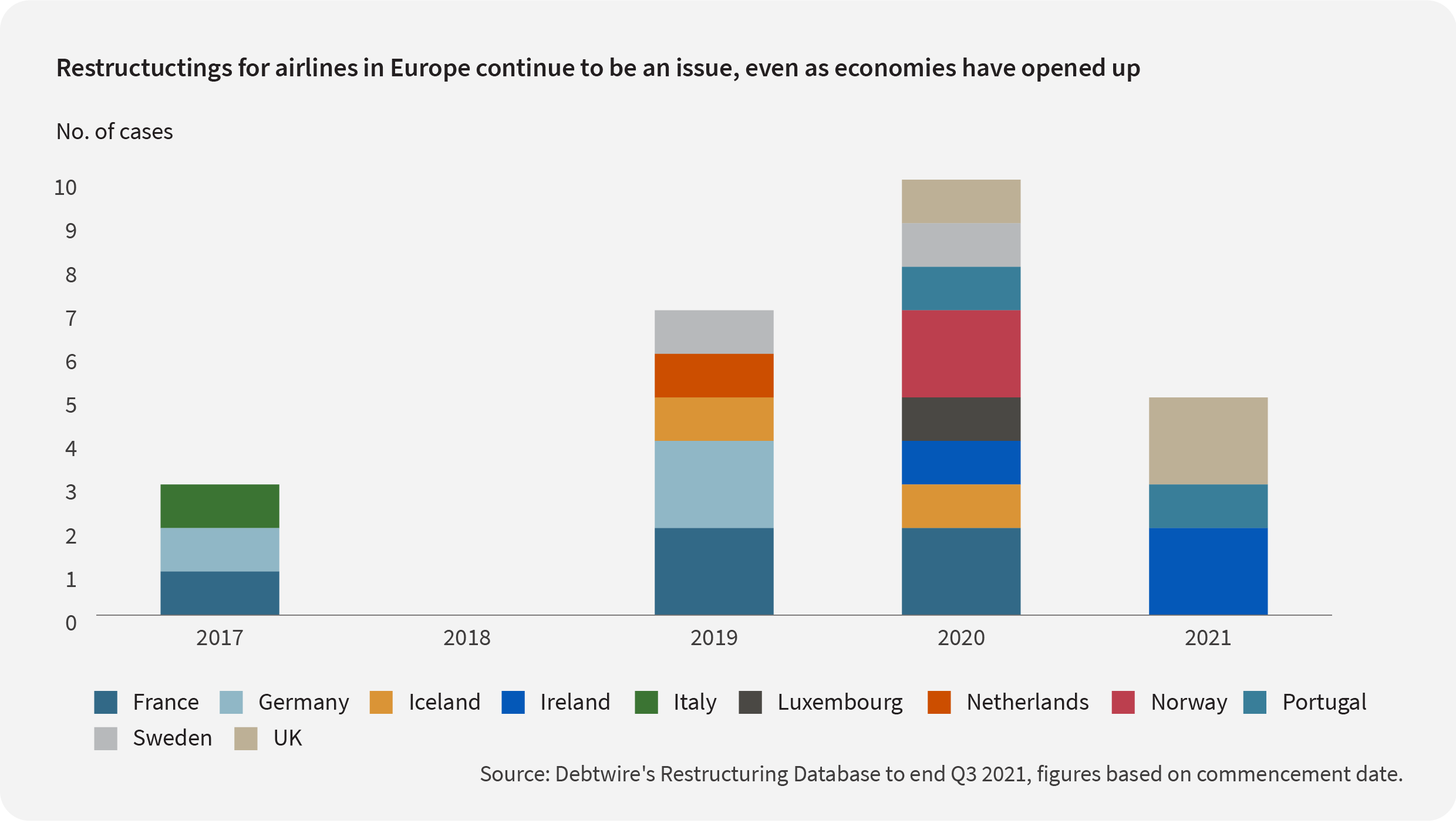 Airlines in the US have remained relatively unscathed, with no large carrier seeking refuge in bankruptcy courts, but European carriers have not been so fortunate. Chapter 15 recognition proceedings in the US have already been used by the likes of Nordic Aviation Group, Norwegian Air and Virgin Atlantic.

One of the first to fall was Flybe. The virus proved to be the final straw for the UK carrier, which entered administration in March 2020 following its widely reported struggle to stay airborne.

By mid-2020, Norwegian Air, TAP Air Portugal, Virgin Atlantic and Swissport all commenced restructurings. Some of that initial activity was insufficient: Norwegian Air needed multiple in-court processes after its first refinancing efforts and Nordic Aviation is currently in the middle of its second restructuring effort within a year.

European airline restructurings involve myriad challenges that are unique to the industry, from heavy industry regulation to complicated aircraft leasing and financing structures, not to mention intricate cross-border issues.

In situations where a restructuring has been necessary, several debtors resorted to formal in-court workouts, such as UK schemes of arrangement and restructuring plans to implement “quasi-consensual” deals where the majority of stakeholders were on board. While Chapter 11 proceedings in the US have the advantage of a worldwide stay, a UK scheme is likely to prove quicker and cheaper, making England the natural forum, especially where finance documentation and aircraft leases are governed by English law.

While a general overhaul of the UK’s restructuring regime had been on the agenda for some time, COVID-19 proved to be the tipping point that spurred the government into action. In the summer of 2020, a package of reforms came into force, including the UK’s new “super scheme”.

UK airline Virgin Atlantic made legal history by securing the English High Court’s sanction of its restructuring plan—the first ever use of the new process. The creditor vote was closely watched to see whether it would result in a so-called “cross-class cram down”, the court having the power to impose the restructuring plan on any dissenting creditors if certain necessary conditions are met. But creditors were widely in support of the plan.

Air travel services group Swissport, meanwhile, resorted to two UK schemes in 2020, the first of which was sanctioned in June and aimed to stave off a liquidity crisis and keep the group afloat while it implemented a wider restructuring. Come November, Swissport was back before the court for round two, this time with a scheme forming part of its in-depth restructuring.