If there was ever a signal that semiconductor companies are bullish on software, Broadcom’s US$61 billion cash offer for VMware is it.

The transaction continues Broadcom’s revenue diversification away from its silicon roots. VMware, a server virtualization software company, adds to Broadcom’s other software plays in recent years—most notably its US$18.9 billion deal for CA in 2018 and its US$10.7 billion purchase of Symantec’s enterprise security business in 2019. But the VMware play is about as big as it gets.

North American semiconductor companies are buying fewer of their peers and turning instead to software companies. Deals for chipmakers declined from a high of 69 in 2009 to a low of 21 in 2021. Meanwhile, deals for software companies have crept up, reaching 17 last year. 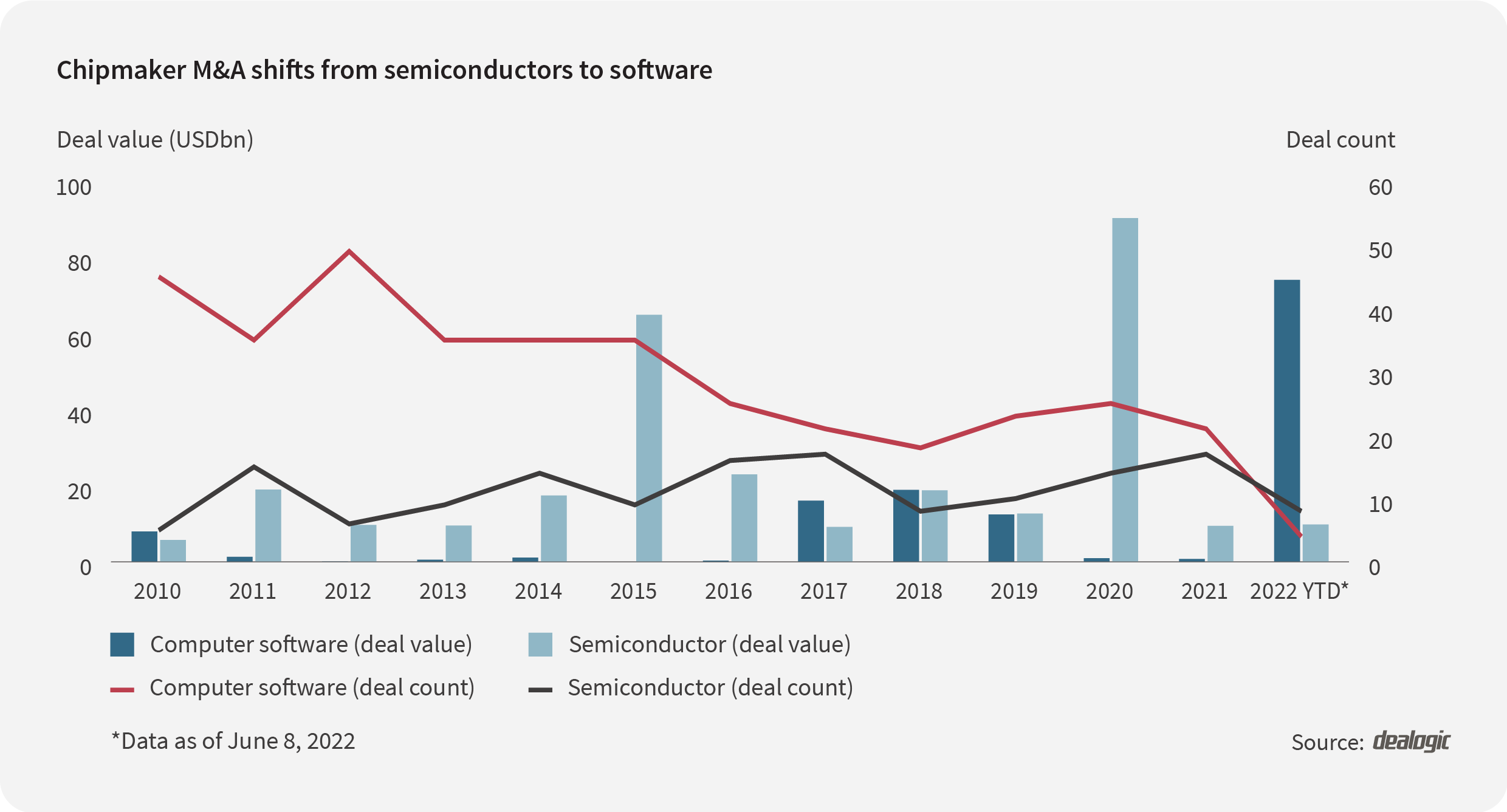 In 2022, for the first time ever, the numbers have inverted: Year to date, North American chipmakers have acquired eight software companies versus only four of their direct rivals. By value, software dealmaking by chipmakers has totaled US$74.2 billion so far this year, albeit mostly thanks to Broadcom’s recent high conviction play, compared with just US$9.8 billion worth of semiconductor acquisitions.

One reason why chipmakers are looking beyond their core sector is the topping out of Moore’s Law (the observation made by Gordon Moore that the number of transistors in a dense integrated circuit doubles around every two years). The law suggests that computational progress becomes significantly faster, smaller, and more efficient over time.

But that trend is reaching its physical limits and, with it, so is the pace of innovation and therefore growth for makers of central processing units (CPUs) and graphic processing units (GPUs). This is pushing traditional chipmakers like Broadcom, Intel and Nvidia to look elsewhere for revenues.

Another reason behind the greater desire for software among CPU and GPU makers is that writing the code that runs the silicon chips they design ensures optimal performance. The shift is akin to the evolution from flip phone to smartphone, which resulted in device makers owning more of the software powered by the chips.

Exceptions to the rule

Not all chipmakers are on the software deal trail, however. Those that design artificial intelligence chips or processors that process data on devices at the edge of the network, as opposed to inside data centers, operate in a fast-growing niche already. This means they can continue to consolidate their core markets.

Analog semiconductor companies are another exception. Their hardware—which is used in the silicon inside power cords or the high-speed cables in data centers—does not need software to run.

But for those not at the analog end of the spectrum or at the bleeding edge of innovation, software has become an important growth hedge.