Biggest is no longer beautiful. The US has long prided itself on its industrial titans—large, diversified conglomerates that have sewn up multiple sectors. But this broad-brush approach has long since fallen out of favor with investors. Better to be a top-tier specialist than a jack of all trades.

General Electric (GE), founded by Thomas Edison in 1892, announced in November 2021 that it was planning to split itself into three separately listed companies focused on aviation, healthcare, and energy. Pharma giant Johnson & Johnson (J&J)—which has an even longer history than GE but is not a conglomerate per se—has similar plans, aiming to separate its consumer goods and drugs businesses.

GE and J&J will be contributing to a trend that is already in play. Last year, while the corporate divestiture deal count ebbed lower, the value of those sales reached an all-time high.

Dealogic data shows that there were 1,226 such deals last year, down from the 2,000-plus that were consistently being made in the first half of the previous decade. But 2021 witnessed a record US$644.5 billion in divestitures, including spin-offs. 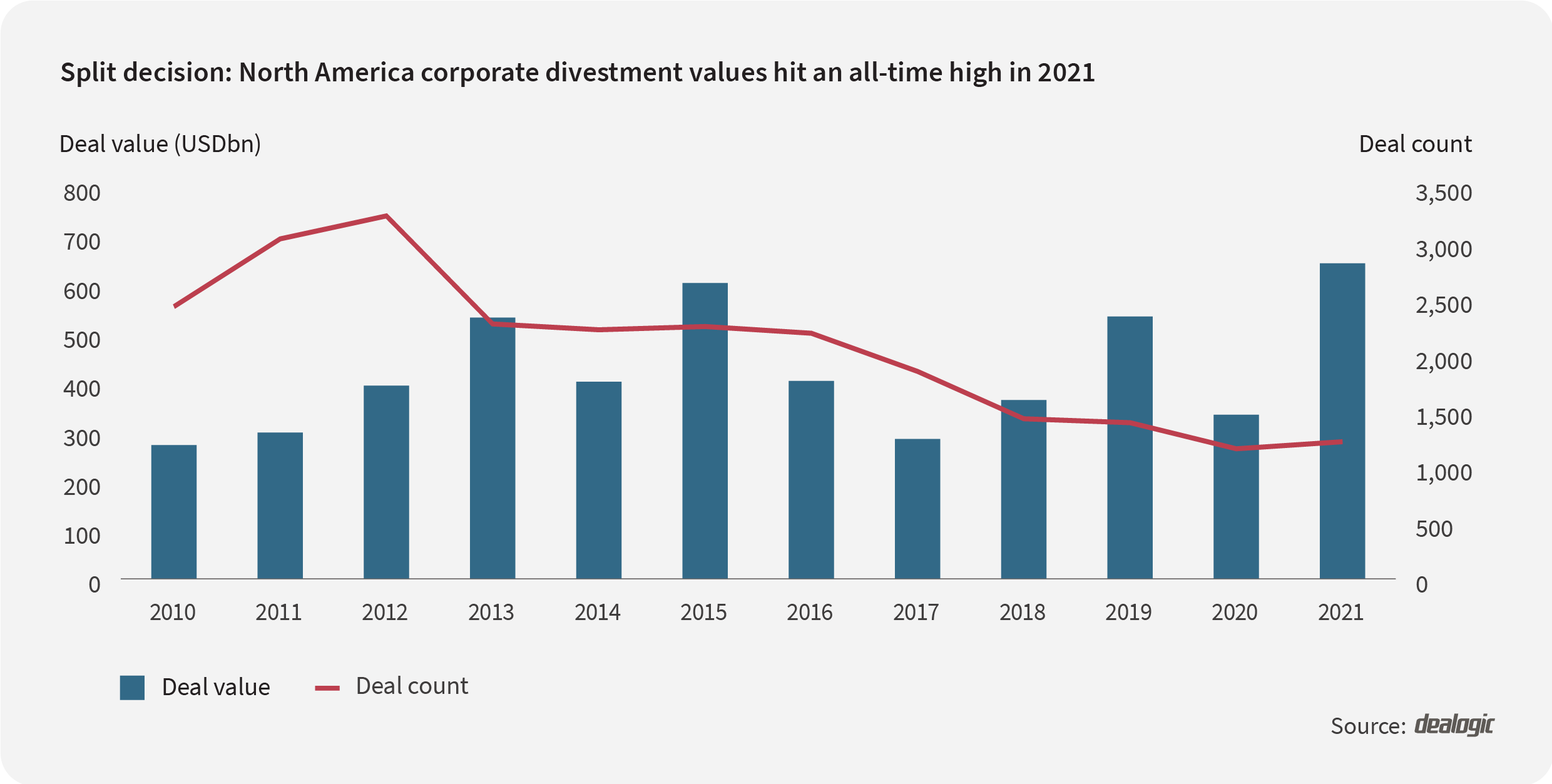 This smashed the previous record of US$604.1 billion set in 2015, when Hewlett Packard split in two, eBay spun off PayPal, and GE and healthcare companies Allergan and Baxter offloaded major assets.

GE is a familiar face in the divestment race—early last year, the conglomerate sold its aircraft leasing unit to Ireland’s AerCap Holdings for US$31 billion—but what really bumped up last year's numbers was AT&T's titanic US$96 billion spin-off of WarnerMedia in a merger with Discovery, aborting its strategic pivot into content to instead focus on 5G. Dell Technologies’ US$62 billion spin-off of its 81% stake in VMware to existing shareholders came in second place.

The reasons underpinning these splits are varied and depend on the business. Ultimately, however, a leaner, more focused parent organization and spin-off company should perform better as separate entities, creating value for shareholders and improving capital allocation.

Investors are rewarding these strategic realignments. Since Silicon Laboratories divested its infrastructure and automotive business to focus on its faster-growing Internet of Things business in April last year, its share price has surged some 33%, despite the chipmaker losing nearly half of its turnover. Divesting low-return assets and instead focusing on innovation and high-growth opportunities makes eminent sense in a fast-changing world disrupted by COVID-19.

Another benefit of divestitures is that smaller, more focused companies are less likely to raise the hackles of antitrust authorities in M&A situations, which is especially pertinent for cash-rich corporates seeking acquisitions for growth.

Apart from GE and J&J, there has been speculation that big tech players might soon come to sell. The US Federal Trade Commission (FTC) is currently pursuing an antitrust probe into competition issues related to Amazon's cloud business, AWS, which could force the e-commerce giant's hand. It was reported only last month that the FTC had been advancing its probe.

DuPont is currently looking for a new owner for its mobility and materials arm, which makes resins and plastics for vehicles and could fetch around US$12 billion. The likes of Advent International, Apollo Global, Carlyle Group and CVC Capital Partners are all reportedly showing an interest in the unit.

Of a similar size is the anticipated sale of Kohl’s online business, as activist investors call on the department store chain to jettison the asset for what could return around US$12.4 billion in proceeds.

America's corporate giants may have the same grand ambitions they ever had, but they may be forced to scale down their expectations.